The secrets of a "Win-Win negotiation"

Maximizing the benefits of business negotiations:
In order to achieve the maximum in negotiations, we have to “get inside” the head of the other side, understand their needs, understand what drives them and what they expect to gain from dealing with us. The rule is simple: the more they gain – as they see it – the more they will agree to meet our needs. While early approaches to negotiations involved looking inside ourselves and emphasizing our advantages (still the practice today!), and while other approaches only look at the other side and investigate his benefits in fact, the key to success using the “create the situation” approach lies in understanding the interaction between the parties, and its effect on decision making. We call the method of negotiation that puts the emphasis on the interaction between the parties “Interaction Focused Negotiation”. It represents a leap forward in managing negotiations in the international business community. This type of negotiation focuses on an analysis of the interaction when planning and preparing for the meeting and for implementation of the most suitable tools for the actual contact.

Interaction focused negotiation:
Interaction focused negotiation is one of our main working tools, as the following example shows: In negotiations we conducted with an Internet start-up, interaction focused negotiation was the pivot of our preparations and the actual negotiations. The company had chosen a strategy of operating for two years using its own sources of capital and credit from banks, so that when it wanted to raise external capital, it would do so based on a higher valuation. Now, although it was profitable in operating terms, it was seeking to intensify its cash basis in order to expand sales and enter new fields of activity. The negotiation was with an investor, who perfectly fits the clichéd definition of a shark. Yes, like those you see on television. In spite of his young age, this gentleman created the impression that the mere fact of being in his presence would ensure us long life. He had built his empire with his own hands and he knew every trick and gimmick in the book. During the negotiations he did not utter a single sentence or make a single offer that did not have the implied comment, “take it or leave it”. Overall, we felt he was a tough, high quality negotiator. Not only that, we knew, and we knew that he knew (and he also knew that we knew…) that his offer was the only investment offer we could raise. Believe me, not the best partner for negotiations… 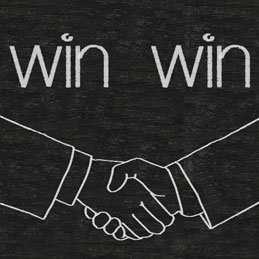 Since the shareholders were unwilling to give up their control of the company, the only investment we would consider was one that granted him 50% of the company capital, but a minority on the board of directors. To our great surprise, he accepted this position, and the stumbling block lay in defining how much he would pay for this slice. We arranged a meeting where he would “inform” us how much he was willing to pay for his share. As we prepared for the negotiations with him, we told ourselves that we would not accept less than a million dollars for half the company. For us, this was the red line. And by the way, we had already hinted at this in previous meetings. The preparation focused on an analysis of how we could improve any offer he made, even if it passed our minimum. Our assumption was that, because of his negotiating skills, any offer made by our “shark” would be open to negotiation; that it would not be a real red line for him, although we expected him to present it in this way. The trick was to find his real red line – the maximum he was prepared to invest.

We analyzed the interaction between us so far, and how we expected it would be, and we decided to focus on a certain weakness of his, which was his youth. He was very proud of what he had achieved at a young age, and felt that this was a great advantage, and we decided to harness this approach for our own needs. At the beginning of the meeting he set out his position: that the company was “worth” $1,600,000 and therefore the most he was prepared to pay for half was $800,000. He added, that “in fact” the company was worth less, but he already considered this amount as an additional premium “so we’ll feel good about it”. This was exactly one of the alternatives we had foreseen, so we put our plan into action. We started by saying that we were very disappointed with his offer (which was the truth), and we turned the focus onto his “youth” as the lever to raise the value of the company. We told him that his youth could be a springboard for the company’s advancement, and the valuation should take this into account; that in fact it was exactly because he was young but such an expert in the market that he could see this aspect clearly; and so on and so forth. After this meeting and one more, our investor “agreed” to raise his offer to $1,100,000 and the deal took off. True, even now we cannot know if we brought him to the maximum that he was prepared to invest, but we are convinced, looking back at the discussions, that our preparation – our work on interaction focused negotiations – was the most effective factor in achieving the additional $300,000 investment (and double that as the evaluation of the company). To sum up, each negotiation has its unique interaction.

In conclusion:
Even if two people are negotiating a deal after they have already negotiated another deal, this time will be slightly different, since each party has also meanwhile slightly changed their “situation”. Interaction focused negotiation, which looks for ways to influence through an analysis of contacts between the parties, represents the basis of this approach to negotiation. For every person and every interaction there is a “key” with which you can get to that person and influence them towards your own position. Both the preparations and the actual negotiations must be based on an understanding of this specific interaction.